Posted on October 14, 2021 by flavorsbyparweenkhan

A Story behind Tlismi Moti…Does it really work or just a myth?


How many of you have heard of Tlismi/Tilasmi moti. There is a magic in the name itself if you translate it sounds ‘Magical Pearl‘

Unfortunately there is no magic but science behind it.

So what is this Tlismi/Tilasmi moti?

Tlismi/Tilasmi Moti is a pendant or amulet that helps babies in painless teething. For centuries, our ancestors have been using the Tilismi Moti, which is an Ayurvedic Remedy and it is a proven solution to all teething problems.

It is a small white-colored pendant, which is made up of a combination of five metals (Panchdhatu) in equal proportions. The names of the five metals which compose the Tlismi / Tilasmi Moti are not mentioned as this is a secret combination and has never been revealed by the makers.

How does Tilismi Moti work?

The pendant or bead lets out certain magnetic forces just like copper rheumatism bracelets, which help to relieve the pain experienced by babies during teething. It comes in the form of a small pearl which is a natural harmonizer of energies around the face and the oral cavity of the child. Tilismi Moti is not a medicine or a magic remedy. It works on a scientific principle. It balances the energy around the oral cavity of your baby and is extremely useful for easing teething problems in babies aged 2 months 3 years.

How to use Tilismi Moti?

This ancient Ayurvedic remedy has helped so many babies during teething, not only in India but in other countries too. The Tilismi Moti pendant needs to be worn around the neck against the baby’s skin at the base of the throat. The pendant needs to be in constant contact with the child’s skin, just like the picture below

Is it safe to use Tilismi Moti?

It has absolutely no side effects. Most mothers who have tied the Tilismi Moti around their child’s neck, simply swear by the effects. Unlike commercial teethers, there is no risk of getting any infection by using Tilismi Moti

Through my personal experience I would say that it definitely feel that it works..I have tied this around the neck of my first child from 3 months to 2.5 years I am not superstitious but it really worked as her teething was smooth. I have tied this around my second child’s neck also as he’s 4 months old now with the hope that his teething is smooth too.

There are many varieties available some genuine some fake.. Be sure on the quality while buying I prefer the one mentioned below.

Also always tie two in one string like the photo below.

Share your opinions and experiences if you have tried it. Also I am eager to know the name of those five metals on which it’s build…if any one of you know please share with us.

Happy Teething to all little munchkins😊 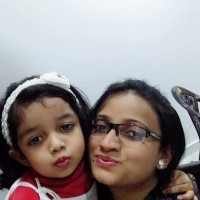